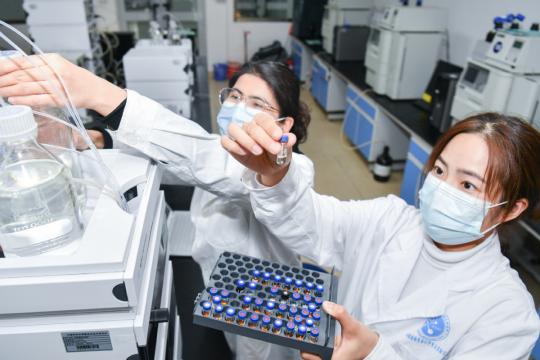 Researchers work in a lab at the biomedicine innovation and research center in Urumqi, Xinjiang Uygur autonomous region, on Nov 2. (Photo provided to China Daily)

The development of traditional Uygur medicines has been significantly accelerated since an innovation and research center was set up in the Xinjiang Uygur autonomous region, researchers said.

"The Xinjiang Biomedicine Innovation and Research Center has become an effective platform to develop Uygur medicines that have a rich history," said Akbar Asar, a researcher at the Chinese Academy of Sciences' Xinjiang Technical Institute of Physics and Chemistry. "It has greatly sped up the process of developing and marketing Uygur medicines."

The institute co-founded the center with the High-Tech Industrial Development Zone in Urumqi, capital of Xinjiang, in June 2013. More than 80 percent of the region's biomedicine enterprises are congregated in the zone, making it the region's key biomedicine development and production hub.

The zone also serves as the locomotive leading the development of ethnic medicines in Xinjiang.

The innovation and research center focuses on the development of medicines from the Uygur and Kazak ethnic groups, which Akbar said are unique and full of potential for further exploration.

Researchers and enterprises can use the laboratories in the center free of charge to optimize the traditional formulas and make trial samples.

"Some research institutes and small enterprises cannot afford to build laboratories for new medicine development because the risk of failure is relatively high," he said. "Now they can put their worries behind. As a result, the motivation and speed of developing new traditional Uygur and Kazak medicines have been greatly boosted."

Most popular in 24h